Korea Tourism Ep.5 How not to get lost in Jongno

Hello. In my previous post, I learned how to take a taxi in Korea and tour Cheonggyecheon.

The current course is Cheonggye Plaza-Samilgyo-Seungyo-Gwangjang Market-Dongdaemun-Dongmyo Market. Dongmyo Market is not visible on the map shown above, but it is located 5 minutes by public transportation and 20 minutes on foot from Dongdaemun.

Gwangjang Market, which we will visit first, is located at the entrance of Cheonggyecheon, within walking distance from Cheonggye Plaza. It takes about 30 minutes.

Today we are going to learn how to find your way around Jongno.

Most of the cultural assets remaining in Seoul today were created during the Joseon Dynasty. There are many cultural assets in other regions other than Seoul, but it cannot be compared to Seoul, the former capital of Joseon.

Among Seoul, the Jongno area can be considered as a condensed area as it is home to five palaces built during the Joseon Dynasty.

For foreigners visiting Korea, the Jongno area can be complicated. Tall buildings and large floating population can confuse foreigners. If I had to pick three places with many tall buildings in Seoul, the first would be around Gangnam, the second would be Yeouido, and the third would be Jongno.

It is also an attractive place for foreigners because it is located in a commercial district and a tourist site. So, I would like to share how foreigners can find their way in Jongno well.

If you have a good Wi-Fi connection, you can easily download free applications from Google play and App store. There are many applications for foreigners visiting Korea. Seoul Travel & Tourism guide, K guide, i Tour Seoul, Visit Korea, etc.

Among them, Visit Korea is more reliable because it is an official application created by the Korea Tourism Organization.

My party and I were able to get a lot of information through an application called Visit Korea.

Now let's talk about how to use it.

First, download the app and enter simple information. The reason for entering the information is to receive useful information from the Korea Tourism Organization later. In order to use the map smoothly, you need to set it separately to use 'Location Services' on your mobile phone. 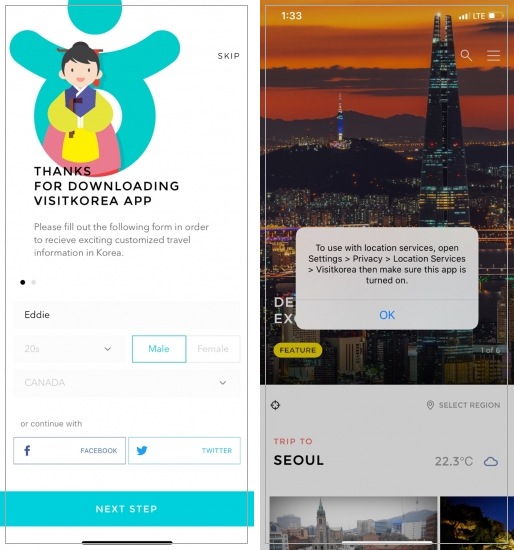 Next, search for the desired place in the upper right corner. Just like how to find a location and way on Google Maps, if you set your current location and set your desired destination, it will suggest various routes such as how to get there by subway or bus, taxi, or on foot.

The biggest advantage of this service is that it shows nearby facilities and tourist attractions even if you do not know your exact location. So, even if you don't have an exact address, you can search by guessing. 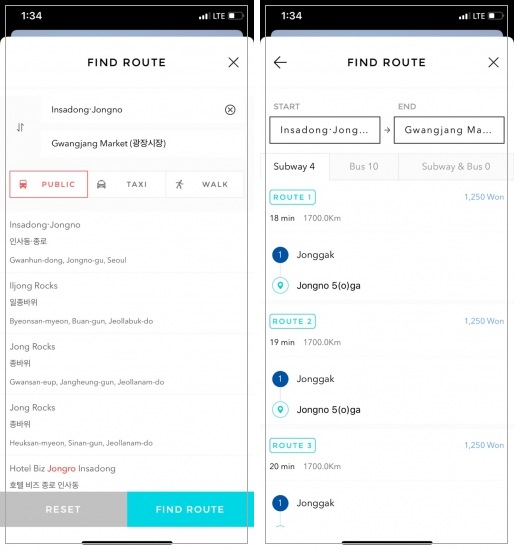 If you look at the picture on the left, I tried to search for Insadong, but you can even select the location of other places that have the word Insadong under it. The screen on the right shows how to get there via Subway, and it tells you that taking the subway from Jonggak Station is the fastest way.

2. How to memorize street names

When I first arrived in Jongno, I was very busy with the number of people and buses passing by. On the second day, when I went to Gyeongbokgung Palace and Bukchon Hanok Village, I noticed that the street names were the same as those that appeared frequently in Korean history.

As a result, I was convinced that if I knew the names of the roads to some extent, I would be able to tour more easily. Let's take a look at the map below.

Sejong-daero means the road where the statue of King Sejong the Great is located. The distance from Gwanghwamun to Seoul Station. Although 'Sejong the Great' can be seen in statues, he is the fourth king of the Joseon Dynasty who invented Hangeul.

There is a place called 'Jonggak' next to Jongno 1-ga, and it is also called 'Bosingak'. The Bosingak bell, which was previously located at this site, is Korea's second treasure. Since the Joseon Dynasty, there has been a bell here, hence the name Bell Road.

Euljiro is one of the longest roads from Seoul City Hall to Dongdaemun History and Culture Park. The origin of the name is derived from 'Eulji Mundeok', a general of Goguryeo. Like Jongno, it is one of Seoul's oldest and representative commercial districts.

Toegye-ro is the distance from Seoul Station to Gwanghuimun. The name Toegye is derived from 'Toegye Yi Hwang', an essential Confucian scholar in Joseon. The reason why there are so many roads in Jongno is because a lot of traffic has to be dispersed.

Yulgok-ro is a long road that runs from Dongsipak-gak, located on the right side of Gwanghwamun, to Dongdaemun. The name Yulgok is derived from a Joseon scholar named Yulgok Yi. The easiest place to find them is the 5,000 won bill in Korea.

You can see various tourist attractions on Yulgok-ro and Sejong-ro.

In the case of Yulgok-ro, many important places in Korea such as Gyeongbokgung, Insa-dong, Changdeokgung, Jongmyo, and Dongdaemun are located.

How to ride the subway in Korea

As I mentioned in a previous post, using the subway in Korea is not very difficult. We got used to it a bit because we traveled by subway and bus throughout the trip. And because I had a friend who lived in Korea for a long time, it was easier than other travelers.

However, if this is your first time traveling to Korea, or if you are not normally inclined to find your way, it may not be possible to move smoothly in Seoul.

However, you cannot take Kakao Taxi all the time, so you should take this opportunity to familiarize yourself with the basics of using public transportation.

There are basically 1 subway lines in Seoul, from Line 9 to Line 9, but there are also other types of trains such as Gyeongchun Line and Jungang Line. You can check it at once by accessing the Seoul Metro website and looking at the subway map.

An easy and quick way to view the Korean subway map is to use the application. Since there are various types of applications, you can choose them according to your preference. Most applications allow you to set the departure station to the arrival station, and provide a method that allows you to choose a faster method or to transfer with a minimum.

Bus use is the most reluctant means of transportation for foreign tourists. Buses you see often in Jongno are those that start with a 2. 260, 273, 270, etc. If you get lost in Seoul, there is one way you won't have to worry about it.

I'm going to share that with you right now.

The picture you are looking at is the bus route system in Seoul.

The last number is the serial number of the bus, and even if the first and second numbers are the same, there is a subtle difference in the route. That's why you get bus numbers like 260, 261, 262.

If you know this system, even if you get lost in Seoul, you can roughly guess the bus number to get on.

One more thing I would like to mention is that in Korea, when transferring from a bus to a subway, you can transfer at no additional charge.

Everyone gets confused the first time they try. It goes without saying that everything becomes easier once you get used to it.

Taking a bus, calling a taxi, and memorizing street names are essential parts of Korean tourism.

When you get lost, the most important thing is to ask the people around you.

To make matters worse, if you don't even have access to the internet, asking people is probably the quickest way.

If you are not familiar with Korean, you can solve it through a travel booklet or an application.

See you next time with a more beneficial trip. thank you.

How to Study Korean?

Initial setting of Hello Talk, an application for studying English

How to Prepare for a Sign Language Interpreter License