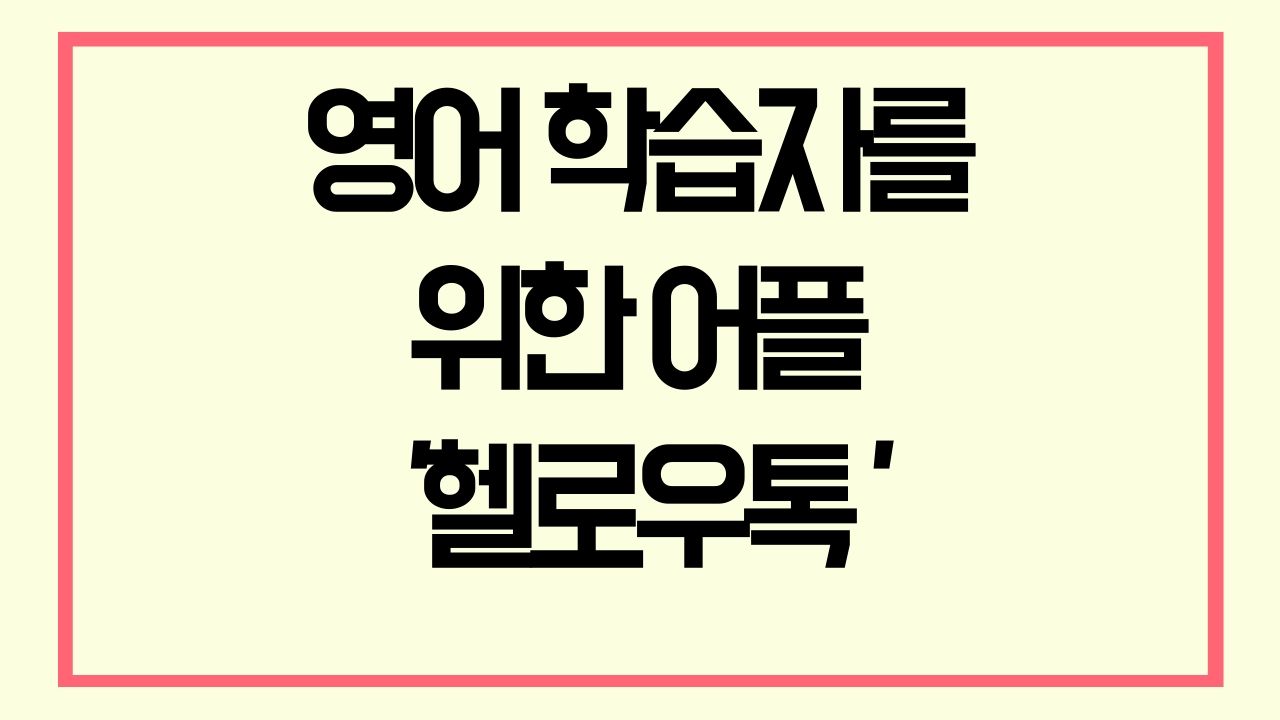 1. The generation accustomed to using smartphones

In Korea, we are currently putting a lot of effort into learning the language. English was taken as a regular subject from the 3rd grade in the elementary school curriculum, but recently, the craze for English learning, such as English kindergarten and private education, is once again blowing. I also started attending English academies when I was in the lower grades of elementary school. Recently, not only offline classes such as hagwons but also many platforms such as YouTube have been created. 21 years after entering the 20st century, the average age to start using a mobile phone for the first time is gradually decreasing. Young children learn the world and learn languages ​​through YouTube. Parents can no longer be disturbed by their children in the dining room. Because YouTube is taking over the parenting role.

Children, who have been accustomed to using smartphones since childhood, use applications more conveniently and faster. So, compared to the previous generation of learners, you can choose your own learning direction and medium more independently.

As with any other language, the most important thing for English-speaking learners is continuous exposure to an environment where they can use 'English'. For example, there are ways to immigrate to an English-speaking country or study abroad. However, not many people will be able to put this method into practice.

If you use a free application, which is one of the best ways to expose yourself to such an environment in Korea, you can be a little more free from your thirst to write a foreign language.

HelloTalk is the most popular language exchange application in the world, and as of 2020, about 2000 million people are using it. As you can see above, it supports more than 150 languages ​​and is a space where you can communicate with people from all over the world. It is available for both Android and iPhone, and operates a website, a blog within the website, and even YouTube.

HelloTalk is a very easy-to-use application. On the surface, it has a somewhat Facebook-like structure, but the big difference is that most users are more interested in learning the language. When you sign up for the first time, there are two things you need to do. First, you need to set your own language. Most of the people reading this article are expected to be Korean and set the settings in Korean.

(2) Fill out your profile

The first thing you see is the city sign. If you set this setting, not only your country but also the region you live in will be displayed. Note that there is a place to set your country initially, but you can change it afterwards. If you set the region located below that, the 'Gu' will appear more specifically than you think.

Location update is a function that is mainly used when finding friends based on 'location', and is used to send messages to nearby friends.

Let's look at 'voice call reception' located next. HelloTalk is not only capable of 'text'-based messages, but also voice calls with users. It is possible to send voice messages as well as voice calls. Please note that functions such as voice calls and sending photos are activated when you send and receive messages with the other party 3 times or more.

As you can see in the picture above, you can roughly determine the language partner. When both languages ​​match, as mentioned above, English speakers and Korean speakers are automatically displayed on the other side's screen to match each other's requirements. Gender can also be set separately like this, and if you do not want to interact with the opposite sex, you can activate it. You can also define the age range of people who will appear in your feed.

Also, since HelloTalk does not register social media in advance, it is invisible to users who have already been added to Facebook, Instagram, and KakaoTalk.

Hello Talk, which currently has more than 2 million users, is different from some existing dating apps. People who are strictly for language exchange exist as more active users, and a smooth language exchange is possible. In the next post, I will show you how to actually use HelloTalk and become more familiar with the app. thank you.

How to Prepare for a Sign Language Interpreter License

4 ways to get from Incheon Airport to Seoul Station

How to use Papago Translator, KakaoTalk Translator and Google Translator